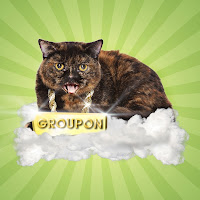 Grouponing, or whatever you want to call it, became all the rage this past year. In the Toronto area there are several organizations offering the opportunity to buy something you may want for a fraction of the regular cost. I thought I'd "group" as many as possible here for your convenience. And so that I could continue to keep up my daily blogging. Oh yeah, and where possible I'll link it so I get credit if you buy this stuff.
That's all I can think of right now. Let me know who I have forgotten. And now, let me tell you about some of the deals I have gotten!

On Groupon I bought gift certificates to The Body Shop. $20 for a $40 gift card. Pretty sweet. Especially since I was able to use the gift card on their crazy Before Christmas sales.

On Team Buy I bought peel and stick posters that I get to design myself. I haven't made them yet but I'm pretty excited about the concept. And it only cost $25 for 3 12x17 posters. I also bought Bucky Balls for hubby and his buddy for Christmas. Way cheaper than they were at the As Seen on TV store.

I haven't bought anything from Living Social yet. But I do like their vacation packages.
Posted by Trudi at 3:37 PM

Email ThisBlogThis!Share to TwitterShare to FacebookShare to Pinterest
Labels: deals