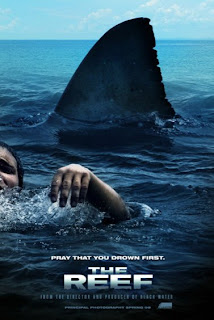 The kid is really in to shark movies. Knowing this, my friend gave me a copy of The Reef. Since I am not actually the worst mother in the world, I decided to watch it first.

That was a good thing.

It was based on a true story and - spoiler - most of the people die.

But I must say - if I'm stranded in the middle of the ocean being hunted by a great white shark - the last thing I am going to do is go over to my friend who is bleeding heavily after being bitten by the shark. Especially if I have no boat and am swimming. Isn't that just asking the shark to eat you too? Now, if it was the kid - yes, I would swim to her no matter what. But anyone else? Not so much.

Incidentally, I don't think I'll let the kid watch this one. It seems like it might be too believable. Let's stick to the cheesy shark films. Maybe Spring Break Shark Attack?
Posted by Trudi at 12:20 AM