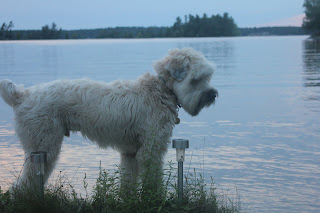 My parents have a Soft Coated Wheaton Terrior. Webster is a sweet, albeit somewhat stupid and untrainable, dog.

The kid as a bit of a love-hate relationship with him. Sometimes she loves him and sometimes she is terrified of him. Mainly because he likes to jump. And lick. And doesn't behave very well so he has a shock collar. But, I digress.

The kid told my mom that she thinks Webster is a "Golden Reacher". Apparently that is the best joke ever because my mom - not my 6-year-old - likes to repeat that one over and over again.

I though my sister would appreciate this post. In honour of her weekend at the lake with the parents. :D
Posted by Trudi at 2:50 PM