Chicken? What has chicken got to do with it? 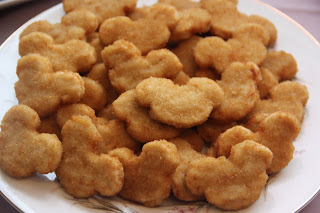 Apparently the kid has chicken on the brain.

While we were in California, our friends were cat sitting for our two beasts. Alas, our house key got misplaced at some point. This led to me spending a couple of hours and $50 getting my set of keys sent overnight from California to Toronto. Not coming home to find two dead cats - priceless.

The kid was with me while I coordinated the delivery. It seems this is not something they often have to do at the business centre at Disney's Grand Californian. I especially loved when she wanted me to assign a value to the keys. The kid wasn't worried. She figured that the cats would drink water from the toilet (sad, but true) and that they'd just catch mice and rip the chicken out of them.

Yup. That's what mice are made of - chicken.

Incidentally, the keys arrived in Toronto and when we got home a week and a bit later the cats were perfectly fine. Alas, they had not caught any mice and ripped the chicken out of them. They had to settle for Iams and Friskies. Poor things.
Posted by Trudi at 7:22 PM