Stupid things I have done 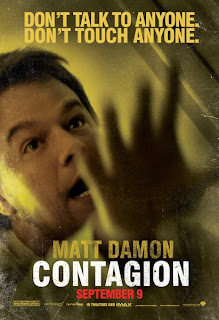 The flight from Toronto to California takes about five hours. You can watch a couple of movies in that amount of time. And I did.

What movie did I watch?

Perhaps it wasn't a good idea to watch a movie about a strange new virus that spreads to millions of people around the world killing a lot of them. Especially not great when travelling with a seven-year-old who likes to touch everything. And sticks her hands near (let's pretend not in) her mouth. All the time. Yup. There was a lot of hand washing going on during our trip.

At least we didn't catch anything. And I suppose the movie choice could have been worse. It could have been Final Destination, Alive or Passenger 57.
Posted by Trudi at 7:23 PM

Email ThisBlogThis!Share to TwitterShare to FacebookShare to Pinterest
Labels: California, movies, stupid me