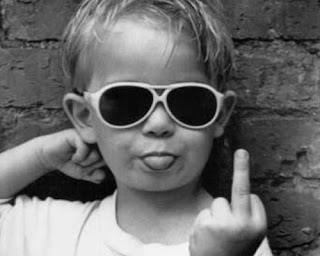 A few weeks ago the kid complained that some kids at her after school taekwondo class were giving her a hard time about her underwear. She has some panties with things like Hello Kitty on them. They're comfortable - she hates lace trim - and they fit. She doesn't care about the characters but I had a hard time finding panties without lace trim. These have been fine for the last few months.

However, now kids are giving her a hassle. My first response, give them the finger. And maybe suggest they find a new hobby other than looking at your underwear.

I wasn't fully awake yet. And yes, I taught the 8-year-old how to give the finger. Not really sure why I thought it was a good idea.

That afternoon she was teased and she gave them the finger. They were shocked but they couldn't really tattle. And the kid still wears her "very comfortable" Hello Kitty underwear.

Incidentally, I did offer to buy her new panties. She declined. I still bought her new ones when I found plain Hanes ones at Walmart (they finally restocked that section). However, she still chooses her Hello Kitty ones most days. And, we haven't been "talked" to by her taekwondo instructers.
Posted by Trudi at 9:46 PM