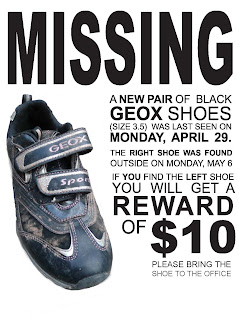 One of the kid's shoes was found a week after it was lost. A teacher located it in the school yard. Just the one shoe though. So, I could no longer convince myself that our loss was someone else's gain. Preferably someone who couldn't afford new shoes.

Nope. There was much searching by the kid. Or at least she tells me there was. I also looked around the school yard. After a week or so, I put together a sign for the school offering a reward for the missing shoe - the kid would be paying the $10. We even secured permission to post the signs from the Principal. Although she wanted the kid to come down and talk to her about it before the signs went up.

The kid showed her teacher the sign and the class headed down to the gym. When the teacher looked out the window and noticed the missing shoe on the roof of the addition!

Alas, we still don't have the shoe. When the school's new addition was built last year (by the kindergarten play area) they failed to install a way of getting up on the roof to recover lost balls and shoes. Apparently they are working on a solution. In the meantime, I owe a certain grade 3 teacher a reward. I believe we agreed it would be pencils. Lots and lots of pencils.
Posted by Trudi at 8:43 PM